The Institute for Greek and Latin Languages and Literature/Chair for Modern Greek Studies is pleased to invite you to the two-fold event that is the first in a planned series of conferences highlighting the research done at Greek and Cypriot Scientific Institutes in the interdisciplinary field of Modern Greek Studies: 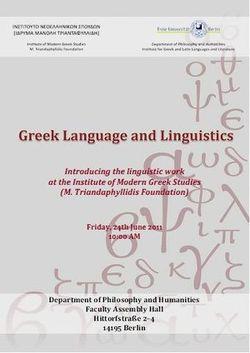 The Conference "Greek Language and Linguistics" aims at presenting the linguistic research and publishing activities of the Institute of Modern Greek Studies/M. Triandaphyllidis Foundation. This research covers a wide range of fields, including the history of the Greek language, dialectology, lexicography, sociolinguistics and general linguistics.

Research on the Greek language at the Institute of Modern Greek Studies: a brief introduction
Dr. G. Papanastassiou

The Institute’s linguistic research and publishing activities cover a wide range of fields, including the history of the Greek language, dialectology, lexicography, sociolinguistics, and general linguistics. This introduction briefly presents the Institute’s various projects and elucidates the reasons that lie behind certain choices.

This paper discusses the rationale behind the Institute’s decision to undertake the study of Modern Greek dialects. The project does not only set out to collect and thoroughly present Modern Greek dialectal data; it also aspires to interpret these data through a new typological approach by means of twenty-four isoglosses. In addition, it attempts to emphasize the importance of Modern Greek Dialectology for other fields of linguistics.

The study of Ancient Greek dialects at the Institute of Modern Greek Studies
Dr. N. Liosis

The Dictionary of Modern Greek Language (1998) by G. Babiniotis and the Dictionary of Standard Modern Greek (1998) by the Institute of Modern Greek Studies, evidently the two most authoritative dictionaries of Modern Greek, are examined in the light of their explicitly stated lexicographic principles and the respective underlying attitudes toward the actual language used by Greeks. It is argued that four of the constituents (or metalinguistic elements) of a dictionary (that is, the entry list, the phonetic transcription of entries, the stylistic labeling of words and phrases, and the usage comments or instructions) may reflect different/opposing stances on the past and present of a language.

This paper compares the lexicographical practices with respect to the semantic and etymological sections of the entries in four recent Modern Greek dictionaries (Tegopoulos-Fytrakis, Emm. Kriaras, G. Babiniotis, and Institute of Modern Greek Studies, Dictionary of Standard Modern Greek). The specific choices in these sections suggest (a) the existence of particular principles adopted in the structure of each section and (b) the ideology concerning Modern Greek and its relationship to Ancient and Medieval Greek.

Decisions about the spelling of a language are not based on linguistic and educational criteria alone. Ideology plays a key-role, and in the case of Modern Greek, it continues to question principles, adopted during the last decades, which introduced simplifications of the Greek spelling system. Such archaising tendencies characterize some recent Modern Greek Dictionaries, proposing spellings like αγώρι, καννέλα, τζύρος, τσιππούρα, etc.

The aim of the project is to both document and analyze contemporary spoken Greek on the basis of naturalistic data. To this end, a corpus of naturally occurring recorded or video-taped Modern Greek talk-in-interaction (everyday conversations among relatives and friends, telephone calls, television broadcasts, etc.) has been compiled. While the data thus obtained can be exploited in various ways, the project fosters the study of linguistic interaction from the perspective of Conversation Analysis and pursues a number of research questions within the conversation analytic frame.

Changes in the presentation practices of television news in Greece
Dr. L. Gialabouki

The practices of journalism have undergone significant transformations over the last years as a result of institutional pressures to reconcile the demands of a competitive market with the need to disseminate reliable information about the world. Drawing upon Conversation Analysis, the present paper seeks to trace such changes by focusing on the way television news is presented in Greece. To this end, older TV news bulletins are compared and contrasted with present-day ones.

The organization of talk in school interaction and students’ subjectivity
Dr. Ch. Kapellidi

According to Conversation Analysis, institutional interaction involves specific transformations in conversational turn-taking procedures. The present paper focuses on classroom interaction, i.e. a particular kind of institutional interaction. Analyzing data from classroom talk, the aim is to demonstrate how participants’ orientation to the above setting affects students’ linguistic behavior, and more specifically the expression of their subjectivity.

The use of grammatical gender as a source of trouble in interaction: exploring the interplay of language, cognition and interaction
A. Alvanoudi

In Conversation Analysis, the study of the organization of practices of repair in interaction has been an area of key interest for the investigation of the relationship between cognition and interaction. This paper examines how the analysis of cases of repair of grammatical gender in talk-in-interaction contributes to the understanding of the relationship between the use of grammatical gender and speakers’ thinking for acting in interactional contexts.

‘Relevant absence’ and its implications for (im)politeness
E. Karafoti

The organization of turn-taking in interaction, as proposed by Conversation Analysis, comprises a set of relevance rules, according to which multiple actions are made relevant. Thus, when an expectable action is not taken, it is a ‘noticeable absence’, from which participants infer that something is happening. By using data of naturally-occurring conversations among friends, the aim of the present paper is to examine participants’ interpretations of relevant absence as an action of (im)politeness.

Indexing trouble: on some functions of the free-standing εμείς (‘we’)
Prof. Dr. Th.-S. Pavlidou

The complexity of the first person plural subject pronoun ‘we’ has been variously pointed out, but its role in null-subject languages has hardly received any attention. My previous work on Modern Greek εμείς (‘we’) has shown that turns containing this pronoun appear only in certain sequential environments. The present paper explores one such environment, i.e. second pair parts to questions (except who-questions), and argues that replies with εμείς entail some kind of problem and/or disalignment, thus indicating an important pragmatic function of subject pronouns in Modern Greek.

Publications of the Cyprus Research Centre

Publications of the Cyprus Research Centre

The Ambassador of the Republic of Cyprus to the Federal Republic of Germany Pantias D. Eliades will donate to the Philologische Bibliothek a series of publications of the Cyprus Research Centre.

Kyriakos Efthimiou from Nicosia will read poems in Greek. Translation in German will be provided.