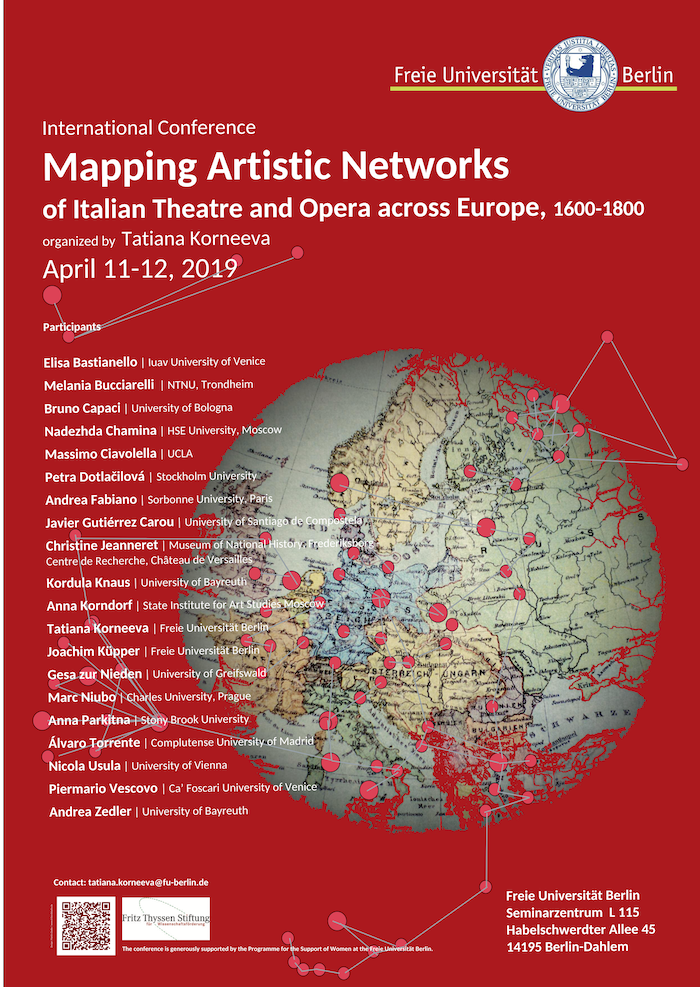 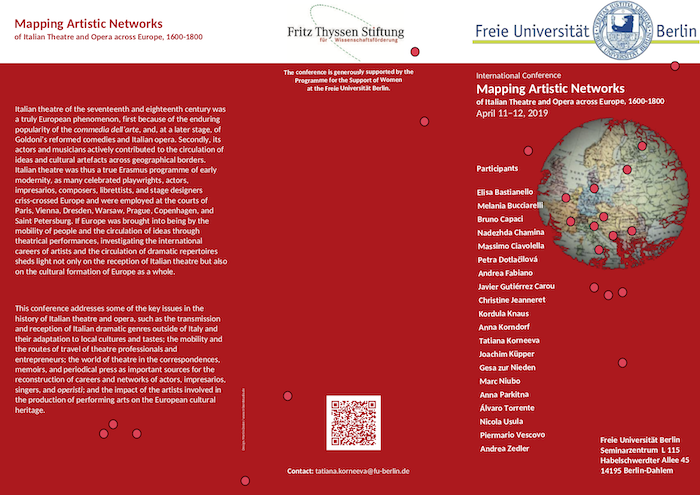 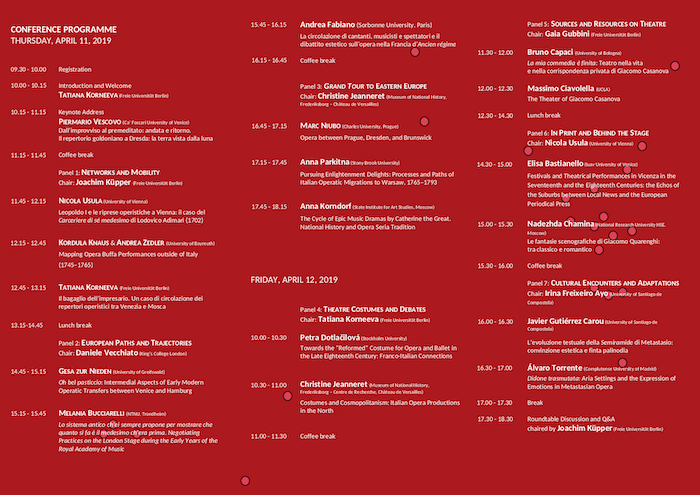 Mapping Artistic Networks of Italian Theatre and Opera across Europe, 1600-1800

Italian theatre of the seventeenth and eighteenth century was a truly European phenomenon, first because of the enduring popularity of the commedia dell’arte, and, at a later stage, of Goldoni’s reformed comedies and Italian opera. Secondly, its actors and musicians actively contributed to the circulation of ideas and cultural artefacts across geographical borders. Italian theatre was thus a true Erasmus programme of early modernity, as many celebrated playwrights, actors, impresarios, composers, librettists, and stage designers criss-crossed Europe and were employed at the courts of Paris, Vienna, Dresden, Warsaw, Prague, Copenhagen, and Saint Petersburg. If Europe was brought into being by the mobility of people and the circulation of ideas through theatrical performances, investigating the international careers of artists and the circulation of dramatic repertoires sheds light not only on the reception of Italian theatre but also on the cultural formation of Europe as a whole.

This conference addresses some of the key issues in the history of Italian theatre and opera, such as the transmission and reception of Italian dramatic genres outside of Italy and their adaptation to local cultures and tastes; the mobility and the routes of travel of theatre professionals and entrepreneurs; the world of theatre in the correspondences, memoirs, and periodical press as important sources for the reconstruction of careers and networks of actors, impresarios, singers, and operisti; and the impact of the artists involved in the production of performing arts on the European cultural heritage.

This broad variety of topics will be addressed with an eye for a truly transnational discourse and a balanced treatment of Italian theatre in a global performance history, while also trying to develop new terms and theoretical frameworks to address the issues of knowledge and cultural transfer. 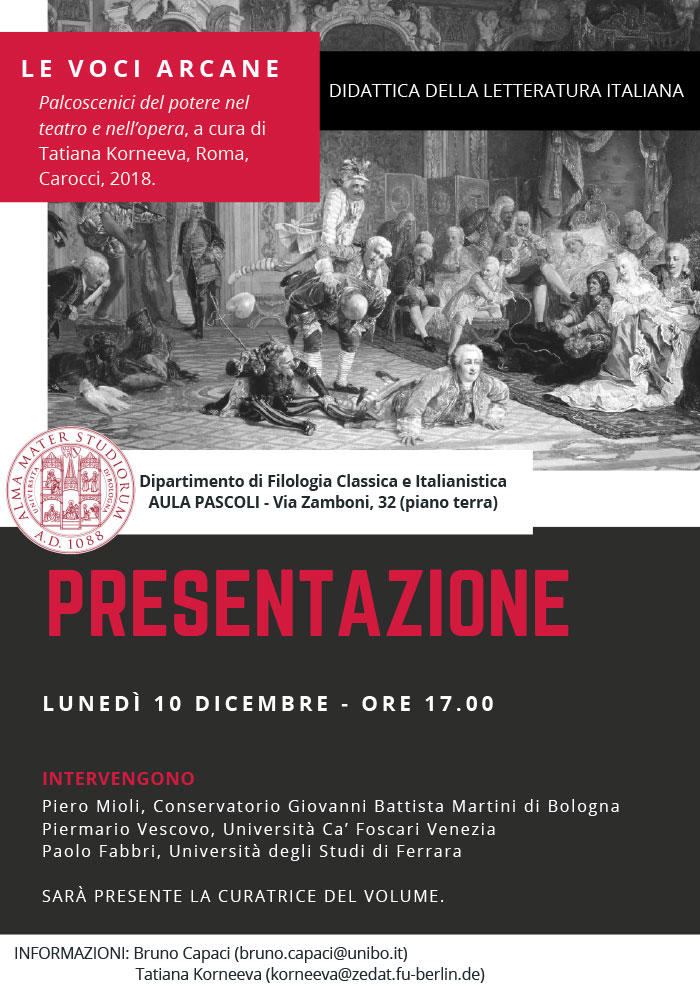 This project focuses on Italian opera buffa, a dominant mid-eighteenth-century phenomenon, and its place in politics and society as a paradigm for understanding processes of knowledge transfer across Western and Eastern Europe. The aim is twofold: first, to explore the role of opera buffa at the Russian, Austrian imperial, and other German courts as a means of investigating the complex semiotic exchange between absolutist politics and the arts, and this particular dramatic form’s more general impact on aesthetic practices and the emerging European public sphere. Second, to employ opera buffa – a widely disseminated art form that provides rich material for investigation into the cross-cultural circulation of art and into European systems of knowledge transfer – as a case study that permits the close examination of the complex cultural transfer of operatic repertoires, the mobility of artists, and the interaction of different dramatic genres in and among the European courts.

The Opera Buffa project is funded by Fritz Thyssen Stiftung under the supervision of Dr. Tatiana Korneeva at Freie Universität Berlin 2017-2019.

Book Project: The Dramaturgy of the Spectator: Theatre, Audience, and the Public Sphere in Late Seventeenth- and Eighteenth-Century Italy

How did spectators experience theatre at the dawn of modernity? How we can reconstruct, describe, and better understand the theatre audiences of the seventeenth and eighteenth centuries? What dramatic techniques did playwrights develop in response to the horizon of expectations of theatre-goers? How did public response, in turn, influence the production and circulation of dramatic works?How and why did audience members in this period gain visibility in discourse about theatre and become both a force of influence and a force worth influencing? When did audience response begin to rival the judgment of specialists and become the primary arbiter of the quality of theatrical performances? What theories on the role of the spectator were developed in eighteenth-century dramatic and aesthetic criticism?

The aim of this book is to provide compelling answers to these unresolved questions. By defining and delineating the formation and evolution of the Italian theatre public from the mid-Seicento through the late Settecento, this book pioneers a shift in the way we think about the audience as both theoretical concept and historical phenomenon. More specifically, this study investigates and then moves beyond spectatorship per se to explore and analyze its reflexive relationship with social and cultural politics in Italy, especially as they concern sovereignty, power structures, and the emergent public sphere.