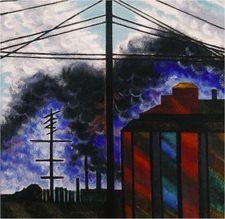 An International Conference organized by the John F. Kennedy Institute for American Studies, Berlin and the Terra Foundation for American Art

Narratives provide the framework and essential justification for interpreting individual art objects and give them meaning and significance in a larger context. They supply key premises which guide interpretive choices and conclusions. In effect, without such narratives we would have no object of interpretation: an exhibition or a book presenting unrelated objects without any narrative link would be considered pointless. Even where critics argue, that art objects do not simply affirm one of these narratives but subvert or question it through their aesthetic strategies, the narrative framework itself nevertheless remains the organizing principle of the argument and decisively influences the way in which the interpreter approaches a particular work.
In this context, it appears of crucial importance for an understanding of historic American art and its assessment to analyze, compare, and historicize the narratives that continue to shape perceptions of American art before 1945: the melodrama of neglect in which American art of that period struggles against the fate of provinciality; the “Voyage of Life”-narrative, in which culture goes through stages of infancy, growth, and maturity; the liberal narrative of American exceptionalism, now reappropriated by triumphalist neoconservative versions of an American mission; the “democratic art”- narrative designed to highlight American art’s potential for dehierarchization and a vernacular modernism; the “discourse / visual culture” narrative, in which the role of art in the naturalization of power stands at the center; the multicultural narrative of American diversity intent on providing recognition for minority expressions; and, most recently, an emerging transnational narrative that emphasizes the increasingly borderless nature of American culture and, in its most radical versions, claims that there is no such thing as an American art. ...