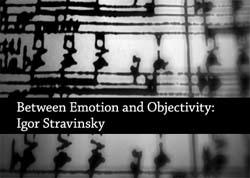 Two clichés regarding Igor Stravinsky (1882-1971) and his music abound: For far more than half a century, music critics, musicologists, textbook authors, and fellow musicians held fast to the opinion that Stravinsky was a poor conductor who, particularly in his later years, did not even follow his original compositional intentions when performing his own works. Secondly the composer and his music embodied the paradigm of the ideal of aesthetic objectivity ("Sachlichkeit"), which has been viewed in certain artistic circles since the 1920s as the cornerstone of true modernity. This supported the conviction that music should be de-sensualized and de-emotionalized, and it was this conviction that later led to a virtual taboo on music's emotive character, which has dominated most discussions on avant-garde music since the end of World War II. But do all these assumptions and interpretations correctly mirror Stravinsky the musician and his oeuvre?