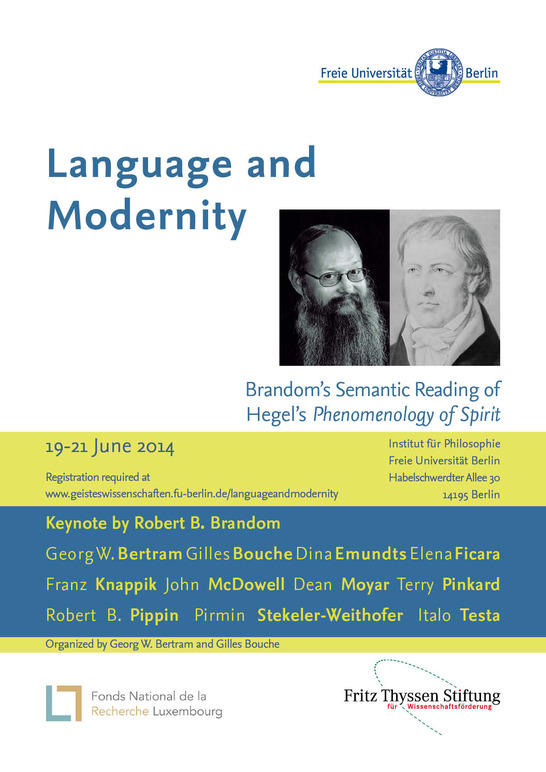 The conference is open to anyone interested in and familiar with Hegel’s Phenomenology of Spirit and Brandom’s A Spirit of Trust. A current draft of the latter can be downloaded from Prof. Brandom’s website.

A Spirit of Trust

Attendance is free, but limited to 60 participants. Prospective participants are required to register by email.

Robert B. Brandom has been widely acclaimed for his authorship of Making It Explicit, in which he develops a philosophy of language that promises to close the gap between semantic theorizing about the meaning and pragmatic theorizing about the use of linguistic expressions. In A Spirit of Trust, his second, yet unpublished magnum opus, he proposes a semantic reading of G.W.F. Hegel’s Phenomenology of Spirit that takes Hegel to put forward a philosophy of language similar to his own, which he thereby recommends in retrospect as hegelian.
The conference provides an opportunity, for the first time, to discuss A Spirit of Trust in its entirety and from a wide range of sympathetic as well as critical perspectives. A particular focus is on Brandom’s reading of the Spirit chapter, in which Brandom can be seen to explore the possibility of a connection between the rather abstract and technical issues treated within his philosophy of language and the weighty cultural issues raised in Hegel’s attempt to conceptualize the sweeping transformation, which in his day was becoming increasingly evident, of traditional into modern societies.