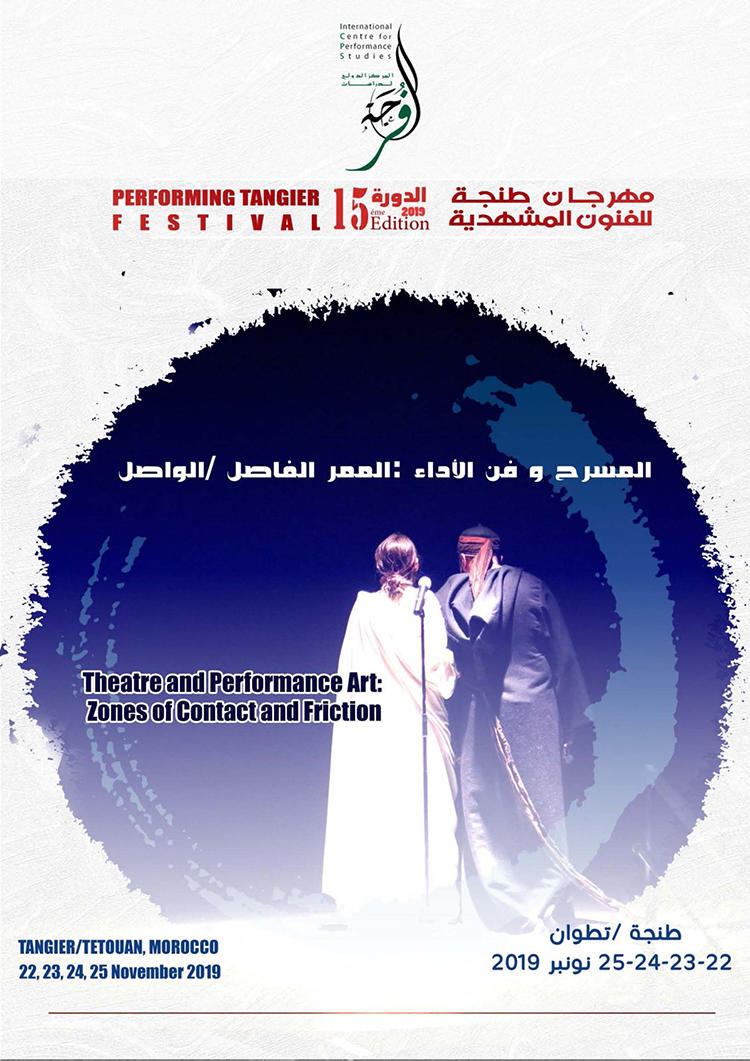 The year 2019 marks the fifteenth anniversary of Performing Tangier Festival and its conference, organized by the International Center for Performance Studies and its national and international partners. This year‟s conference‟s theme, THEATER AND PERFORMANCE ART: FIELDS OF FRICTION AND CONTACT, explores a key question related to performing arts: Can „theater‟ (still) be understood as the antithesis to „performance art‟? How can their points of contact, friction, and interweaving be described? The term „performance art‟—as it was coined in the US in the 1970s and then quickly spread across the globe—was often presented as incompatible with a particular understanding of „theater‟ (i.e., as an art of dramatic representation), especially—but not only—in Anglo-Saxon discourses. Since then, „performance art‟ has emerged as an interdisciplinary and translocal art form that challenges categorization and fixity even when it‟s trying to define its own territoriality. In the field „theater,‟ on the other hand, many new dramaturgies have emerged since the 1960s around the globe, offering—again and again—fresh ways of interrogating theatrical presence and negotiating the roles of performers and spectators. These innovative dramaturgies not only undermined a conservative, orthodox notion of „theater‟—established in the 18th and 19th century in Europe—which insists on the production of narrative meanings through dramatic representations. They also moved „theater‟ closer to „performance art‟ (or vice versa), for example by disrupting or disintegrating neo-classical notions of unity and character. Today, dramaturgical practices have become so transdisciplinary and diverse that any attempt at redefining the field of the performing arts by working with clear-cut dichotomies (such as theater/performance art or East/West etc.) seem to have become not only outdated but also impossible. In consequence of these developments, several issues moved to the heart of heated discussions:

In 2011, the so-called „Arab Spring‟ intensified or even radicalized the previous Arab avant-garde critiques of modernist regimes of theatrical representation. Re-injecting more “worldliness, or „historical actuality,‟ „figuration,‟ and „narrative‟ into modernist „formalist self-reflexivity‟”1, the Arab Spring movements in the performing arts further contributed to the already on-going blurring of boundaries between „theater‟ and „performance art.‟ While the Arab theatrical avant-garde of the late 1960s was very much occupied with the retrieval of traditional Arab performance cultures, the current aesthetics of performance as developed and staged by contemporary artists are way beyond that. In the contemporary Arab world, „theater‟ has become much less “the place of a narrative act”, to use Hans-Thies Lehmann‟s words, but a place where narrative acts themselves have become objects of critical investigations as well as “a means of ordering the world”. This is evident in the works of Rabih Mroué, Lina Saneh, Nora Amin, Abdelmajid El Haouasse and many others artists. In “Who‟s Afraid of Representation?” (2008), for example, Mroué and Saneh investigate the fluid borders between presentation and representation in relation to role-playing onstage. In the same year, “Looking for a Missing Employee” was performed via Skype to a distant audience in Japan while Rabih Mroué, the performer, was in Beirut. The performance was still accepted as „theater‟ due to the live broadcast. Inspired by discussions during previous conferences, we propose a double-edged dialogue which is artist-driven and research-oriented. The symposium seeks to tease out some of the complexities related to borderlines and zones of contact and friction in contemporary theater, dance, and performance art. It is a call for a more critical attention to forms in motion produced performatively in the context of on-going processes of interweaving between performance cultures. These forms have become very visible in Arabo-Islamic contexts, too. We invite scholars from around the world to join the debate and offer elements of reflection on the various problematics related to the following proposed questions and topics:

The conference is part of the International Festival “Performing Tangier” now in its 15th edition. The theme was carefully chosen as a follow-up of our previous international symposia, with the expectation that it would be sharp enough to elicit diverse intellectual contributions from distinguished experts and colleagues from many parts of the world and in many areas of research. Besides academic panel sessions, the conference program will be nourished by a rich artistic public agenda with workshops, exhibitions, book launches, and diverse performances and artistic interventions relevant to zones of contact and friction, plus receptions and gala dinners to be announced after the opening ceremony.

The organising committee welcomes abstracts and proposals strictly on the above issues. A 250-WORD abstract, along with a ONE PARAGRAPH curriculum vitae, should be submitted electronically (preferably in Word or Rich Text format) by 30 June 2019 to the scientific committee care of Professor Christel Weiler (Co-director of the International Research Center „Interweaving Performance Cultures‟ at Freie Universität Berlin), Khalid Amine (Conference Co-convener). Acceptance, however, unfortunately does not include any financial support - participants are responsible for their own funding (i.e. securing grants, etc.) to pay for travel and lodging expenses. Selected conference papers will be published in a special volume upon the approval of the scientific committee. Submitters of accepted proposals will be notified within four weeks of the above deadline and all decisions of the scientific committee are final.