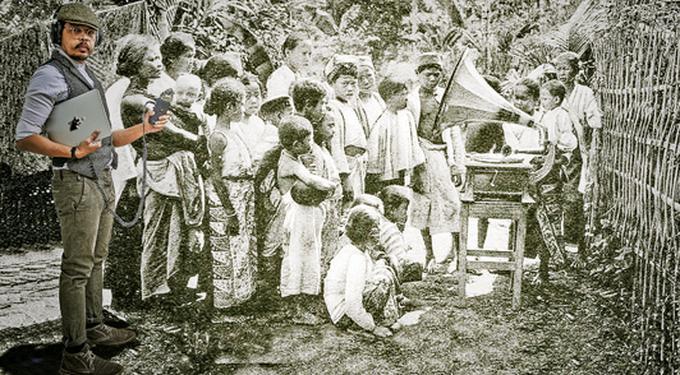 There’s a separation between “music” and “sound” – with all the violence that comes with borders. In Echoing Europe, the performer and sound studies scholar meLê yamomo re-arranges European musical appreciation as colonial history.

Noise, din, background buzz, sound waves hit the eardrum. Sounds are physical touches. Touches of something unknown. If we knew what it was it might actually be “music”. Who decides what is “sound”? Who would classify it as “music”? Can we stand this touch?

In Berlin, in the world’s most extensive archives, sound recordings are stored as trophies of a colonial sound-appropriation. The portable gramophone turned fleeting occurrences into transportable raw materials for the scientific and historical construction of Europe and its “outside”. What do we hear in these recordings today? What do they mean for the construction of our image of Europe, the European musical tradition, for the construction of “others”? For years meLê yamomo has been concerned with these historic recordings and sound linkages.

With Echoing Europe, meLê yamomo creates a new sound chamber at Ballhaus Naunynstraße: electronic music and historic sound documents, recordings dealing with the Berlin archives and their current policies constitute the elements of his musical narrative. A central issue in this is his own role, his mobility and forced paralysis within postcolonial academic and cultural structures. After participating in the international performance festival Permanente Beunruhigung, this is the transnationally operating performer’s first work at Ballhaus Naunynstraße.

Produced by Kultursprünge at Ballhaus Naunynstraße gemeinnützige GmbH. Financed with funds from the Land Berlin, Senate Department for Culture and Europe.