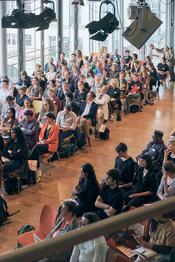 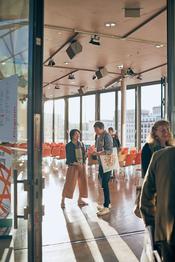 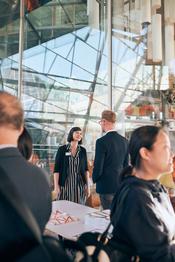 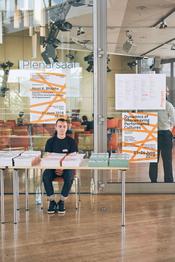 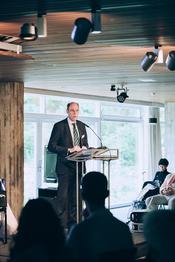 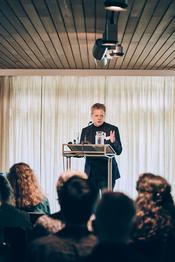 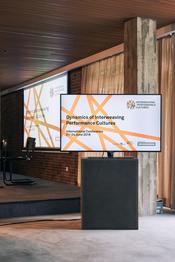 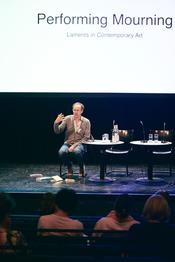 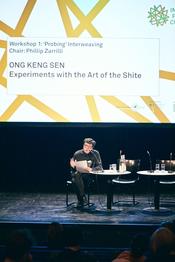 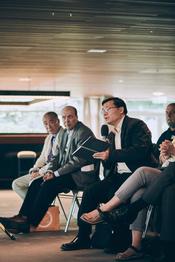 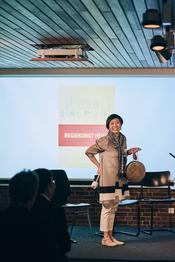 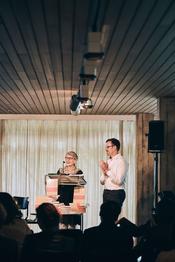 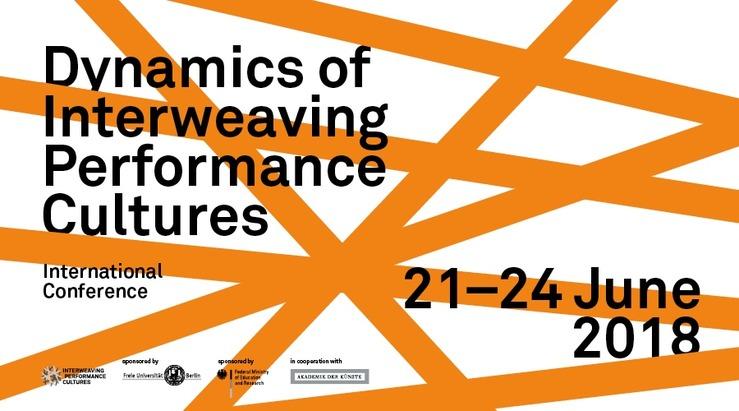 The international conference “Dynamics of Interweaving Performance Cultures” took as its departure the investigation of the key topic in research on interweaving performance cultures - the notion of knowledge. In four panels and two workshops, up to 250 scholars from around the globe explored the dynamic relationship between past and present processes of interweaving, as well as between performance cultures and practices of knowledge production. Seeking to consider globally shifting conditions, identify overarching themes and topics, and create a new dynamic in international scholarship on performance, the conference was envisioned as the closing event of the International Research Center “Interweaving Performance Cultures” which was founded in 2008. The conference took place at Akademie der Künste Berlin. The opening keynote by Homi Bhabha was presented at the large plenary hall at Pariser Platz. During the following days, the conference was held at the historical building at Hanseatenweg.

After the welcome speeches by Sabine Eilers (BMBF) and IRC Director Erika Fischer-Lichte, Homi K. Bhabha (theorist of postcolonialism, Harvard University) opened the conference with his keynote on “Dignity in Extremis. The Ethics and Epistemology of Displacement.” By addressing the fate of refugees at the borders of Europe and by reflecting on the current erosion of ethics and humanity and not least the role of the humanities in the struggle for these values, Bhabha sent out a political appeal to the more than 250 listeners. Due to the proximity of the venue to the Brandenburg Gate, the historical site behind which the inner-German border once ran, as well as the silhouette of the Reichstag, which was clearly visible through the windows, the message of the lecture received an additional urgency.

The following three days of keynotes, research papers, artist talks and workshops discussed intensively how interweaving processes are related to knowledge shifts as well as how divergent knowledge systems and theories of knowledge should be acknowledged more profoundly.

Following an official welcome by Peter-André Alt, President of Freie Universität Berlin, the second keynote was held by Walter Mignolo. Mignolo, theorist of decolonization at the Duke University, investigated the following question: Is interweaving enacted from the territory to its exteriority or from the exteriority while disregarding–but still entangled with–the territory? He argued that disobeying the principles and regulations established by the hegemony of Western epistemic territoriality can hardly come from within the territory. To this extent it has to come from its exteriority. Furthermore, he asked whether interweaving, in spite of the directionality, happens at the level of imperial or colonial differences.

The first panel, Forgotten Futures: Neglected Histories of Interweaving, introduced some key aspects of the conference’s theme: IRC Co-Director Matthias Warstat framed the concept of interweaving within its always challenging historical dimensions. Helen Gilbert explored the contemporary war heritage formations at the intersecting frontiers of history, commemoration, postcolonial dramaturgy, and arts-based knowledge transmission. In her talk “Indigenous Theatres of War and Remembrance,” she argued that such memory work potentially reveals not only how disparate accounts of the war are embodied and socialised as heritage, but also what seems to be invested in their transmission across time and place. Nicholas Ridout related Bertolt Brecht’s image of the ideal spectator as someone who watches while smoking in contradiction to an entirely bourgeois conception of knowledge. His paper “Complex Smoking” suggested that attending to this forgetting might be one way of producing an alternative epistemology for the theatrical spectator.

The second part of this panel was chaired by Jean Graham-Jones, who introduced Stephen Barber and Shen Lin as next panellists. Stephen Barber focused on how interweaving of performance cultures creates unique conditions and processes of working which enable knowledge of lost, forgotten or neglected performances to be reconstituted and communicated. Talking about the Osaka World Exposition of 1970, he asked how the knowledge of such a ‘lost’ performance can be revivified and made relevant for contemporary performance research. Shen Lin considered modern theatre history, discussing how its theories and movements can energize endeavours that change modes of learning, patterns of thinking and ways of living.

The second panel featured two papers on Generating Knowledge through Interweaving. Chaired by IRC Co-Director Gabriele Brandstetter, Christopher Balme focussed on the post-war theatrical epistemic communities, networks of knowledge, and their permanent institutional forms after 1945. In his talk “Theatrical Epistemic Communities,” he also considered international organizations like the International Theatre Institute (ITI), the International Association of Theatre Critics (IATC) or the International Federation for Theatre Research (IFTR). Hanne de Buine spoke about Kattaikkuttu, a Tamil-language based, rural Indian theatre form, as a source of knowledge. Intrigued by the question how trained Kattaikkuttu performers produce eight-hour-long events in the absence of a detailed written “script,” she formulated the idea of an oral reservoir as a community owned storehouse of embodied, local, organic knowledge, and know-how underlying all-night Kattaikkuttu performances.

After each panel’s presentations, a discussion followed.The panel’s chair asked the respective respondents (former IRC Fellows) to open the discussion with short comments, observations, questions or remarks. This broadening of perspectives enriched the thematic discussions enormously.

The final session of the long day featured Rabih Mroué’s non-academic lecture “Sand In The Eyes.” Based on research material comprised of Islamist recruiting videos, Mroué, theatre director, actor, visual artist and playwright born in Beirut and currently living in Berlin, asked not only what these videos reveal about their producers or the videos’ capacity to engage young people for the means of Islamist propaganda, but also questioned the politics inherent in dealing with these propaganda videos from the point of view of the state and society.

The second conference day began with the keynote “The Language of Performance” by Ngũgĩwa Thiong’o, novelist, essayist, playwright, journalist, editor, academic and social activist from Kenya, and currently Distinguished Professor of English and Comparative Literature at the University of California, Irvine. Exploring the performance of language, wa Thiong’o engaged other conference participants like Gabriele Brandstetter, Susan Manning, and Sola Adeyemi to read his poems about Nelson Mandela and Gabriel García Márquez in their native languages (German, English, and Yoruba).

Chaired by Sruti Bala, the next panel explored the issue of Fear of Interweaving. Khalid Amine talked about the “Interweaving Debate within Arabo-Islamic Contexts.” This was followed by Ananda Breed’s paper entitled “Interweaving Trauma and Aesthetics in Post-Genocide Rwanda,” which gave a completely new perspective on the interweaving of applied performance methodologies. In the discussion and responses, one question was particularly in focus: Who is afraid of interweaving and why? In today’s world, this question seems to be of utmost relevance as it addresses the fear of cultural exploitation, of devaluation, of exoticization, and, not least, of the unknown.

The second conference day was rounded off with a book presentation and podium discussion on The Art of Directing Today. Tian Mansha and Torsten Jost introduced their new book Regiekunst heute. Stimmen und Positionen aus China (2018). A special guest was the well-known director and actor Herbert Fritsch.

On early Sunday morning, all guests gathered for the final panel Epistemologies of Performance Cultures. The thought-provoking lectures by Sundar Sarukkai and Malgorzata Sugiera, as well as the gripping intervention by Rustom Bharucha, revolved around fundamental questions such as how processes of interweaving between performance cultures generate knowledge and how culturally divergent knowledge systems and theories of knowledge can be acknowledged, investigated, and methodologically interwoven.

The conclusion by Erika Fischer-Lichte was eagerly awaited, which at the same time marked not only the end of the conference but also the end of the weekly program at the Center. In the end, the IRC Director suggested that performance-related concepts themselves should be used as epistemological orientations.

The conference ended with great applause and standing ovations.

More detailed information about the speakers and their lectures is available in our Book of Abstracts.

One aim of the upcoming work at the Research Center is to unify all conference contributions in a volume entitled Dynamics of Interweaving Performance Cultures.

An excellent example of the productive cooperation is already provided by a wonderful overview of the numerous publications by the Fellows of the Center: Key Publications on Interweaving Performance Cultures.