Rereading Aristotle, Dionysius of Halicarnassus, and Demetrius through the lens of contemporary narratology provides scholarship with a potentially fruitful perspective for investigating the relationship between historical narrative and other forms of literature. In particular, the reflections of Dionysius and Demetrius on narrative style at the micro-level, as well as those of Aristotle on history and tragedy as ways of representing knowledge at the macro-level, might enable historians and comparatists to focus on the question of how pan-European historical narratives are related to the drama of their times.

Accordingly, the topics of this conference were the forms, motifs, and strategies employed in pan-European historical and mythological plots (such as the Lucretia legend, the Trojan war, and the Griselda tale) in Early Modern historical drama from Giangiacomo Trissino to Jean Racine, and from Joost van den Vondel to Alexander Sumarokov. The rise of a pan-European intellectual and literary space—the respublicalitteraria—enabled and promoted an intensive interaction between various spheres of artistic productivity, rendering particularly stimulating a comparative investigation of the use of the abovementioned motifs in various spheres of the intellectual and artistic cultures of the sixteenth and seventeenth centuries.

Special attention was paid to drama, since it clarifies the relationship between the universality of literary and historical narratives and the formation of national conventions, with their different forms and languages. In this way, attention was paid both to those works of art that are considered peripheral (according to the established history of European literature) and to hitherto unnoticed or marginalized figures of European theatre. Of particular import in this respect are the strategies of reception of literary genres and stylistic canons, the epistemological principles of historiography (such as discussions about certitudo historica, historical Pyrrhonism, the aporia of history as ‘science about contingency’), as well as the general philosophical and political foundations of the historiography of the sixteenth and seventeenth centuries in European drama.

The conference proceedings volume has appeared with de Gruyter publishers and is available online via Open Access. 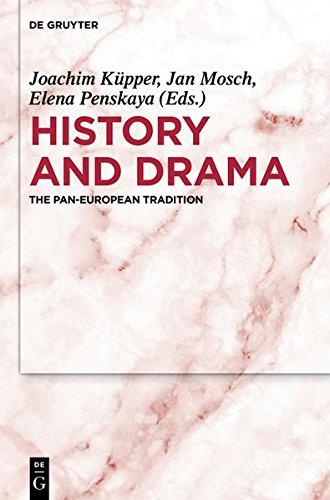