Leonard Barkan is one of the most distinguished and inventive scholars of Comparative Literature in the United States, who has explored the intersections between literature and art history for many years. Before moving to Princeton, he was a professor of English and of Art History at universities including Northwestern, Michigan, and New York University. Among his books are The Gods Made Flesh: Metamorphosis and the Pursuit of Paganism and Unearthing the Past: Archaeology and Aesthetics in the Making of Renaissance Culture, which won prizes from the Modern Language Association, the College Art Association, and Phi Beta Kappa. He is the winner of the Morton Dauwen Zabel Award from the American Academy of Arts and Letters.In spring 2010, he received Princeton's Howard T. Behrman Award for Distinguished Achievement in the Humanities. Bestowed annually, the Behrman Award was established in 1975 by a gift from the late Howard Behrman, a physician and book collector.

He has been an actor and a director; he is also a regular contributor to publications in both the US and Italy, where he writes on the subject of food and wine. He has recently published Satyr Square, which is an account of art, literature, food, wine, Italy, and himself, and completed Michelangelo: The Hieroglyphs of the Mind, a study of the artist’s habit of writing words on his drawings.

During his stay at the Freie Universität Berlin (April - July, 2010), Professor Barkan will be completing work on a book entitled Mute Poetry, Speaking Pictures, to be published by the Princeton University Press, and he will be working on a project concerning relations between food culture and high culture in antiquity and the Renaissance, a subject on which he will be delivering the Thomas Spencer Jerome Lectures at the University of Michigan and the American Academy in Rome in 2011. 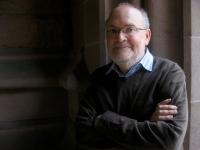