B. Ananthakrishnan is a professor in the department of theatre arts, Sarojini Naidu School of Arts & Communication, University of Hyderabad. He has obtained an MA in Drama and Theatre Arts from Pondicherry Central University and a Ph.D. in contemporary Malayalam theatre from the University of Madras. Since 1991 he has worked as researcher in the field of performance and folklore at St. Xavier’s College, Palayamkottai, Tamil Nadu, and at the University of Calicut, Kerala, before joining S. N. School as associate professor in 2000. Currently, he teaches production process and contemporary Indian theatre. Specializing in Indian performance studies, he has published articles on Indian theatre in journals such as Theatre India and Theatre Research International, and has contributed to different anthologies and encyclopedia such as the Encyclopedia of Asian Theatre (edited by Sam Leiter, Greenwood, Westport, 2007). As the executive committee member of the International Federation for Theatre Research (IFTR) and founder general secretary of the Indian Society for Theatre Research (ISTR), he has taken up different research initiatives on theatre to foster the research culture in the field.

The main objective of the project is to work on the three fundamental ideas of nationalism, modernity and knowledge production, and its processes that shaped modern Indian theatre in the postcolonial period. These three ideas are interconnected and functioned with mutual association in generating a sense of ‘Indian’ theatre in the complex cultural context governed by the different regional languages and cultures, especially against the backdrop of strong performance cultures in different genres as well as the colonial and classical cultural liabilities of English and Sanskrit respectively. Most of the writing on Indian theatre addresses the segregated terrains under separate categories such as urban, political and regional with the caveat that it is difficult to look at the diverse landscapes of theatre in India due to the language plurality and heterogeneity.

The project is an effort to look at the different movements initiated by political activists and theatre activists towards shaping a culture of modern drama/theatre from the first half of 20th century as part of a literary modernity – dramatic modernity appeared during the second half of the century with a transformed identity and agenda under new leaderships in the postcolonial period. Multiple organizations and institutions were also part of this movement to generate theatre literacy on a conceptual and practical level irrespective of the regions and the urban and rural divide. The Ibsen Society (Chennai), Natyamanvanthar (Mumbai), I.P.T.A (Indian People’s Theatre Association), the Natakakkalari movement (theatre workshop movement) in Kerala, Samudaya (Theatre Collective) in Karnataka, long-term workshops organized by the National School of Drama, occasional workshops by eminent theatre practitioners such as Habib Tanvir and efforts by Bharathiya Natya Sangh and the Indian National Theatre are seen as the significant players in the public sphere for disseminating the idea of modern theatre and its principles of practice. They inform the different constituents of theatre and its purposes in terms of creating meaning on stage with its theatrical functions as a counter to the traditional notions of modern theatre where declamatory speech and singing were seen as the craft of theatre. These efforts have to be seen as a paradigm shift from a literary (dramatic) modernity to a theatrical modernity in the changed political context of the nation, granting prime importance to the ‘performance’ instead of the text–theatre continuity.  The diverse regional performance forms – narrative and non-narrative – have been brought under the canopy of Indian theatre, leading to the synthesis of interweaving of performance cultures which resulted in the coining of Theatre of the Roots and the creation of a national model. My proposed project is to look at the idea of ‘Indian theatre’ and its transformations engaging the theoretical tools drawn from the concepts of nationalism, modernity and knowledge production in order to theorize the processes of shaping the terrain of Indian theatre and its paradoxes. 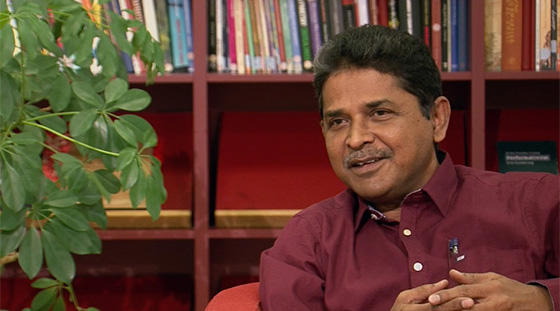 Watch a video interview with B. Ananthakrishnan.