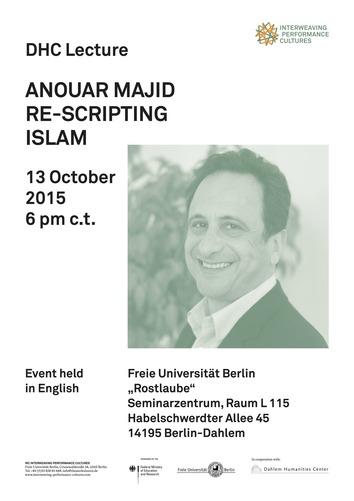 It is mindboggling that the debate around Islam continues to be grounded on the shared assumption that supernatural events are unmistakable facts of history and that canonical Muslim texts are practically sacred. It is equally puzzling that many people have long accepted that the West (in its Christian or secular formulations) and the world of Islam are unrelated in every sense of the word. Our bleary-eyed view of religion explains, to a large extent, the violence that haunts our world today and our inability to think of new paradigms and solutions. In his lecture, Anouar Majid will challenge us to move beyond these ideological constructions, rethink our notions of West and Islam, and invite us to think about a future without attachments to crippling traditional commitments.

ANOUAR MAJID is Vice President for Global Affairs and Communications, the founding director of the Center for Global Humanities, and the founding chair of the Department of English, which he headed from 2000 to 2009. He is also the General Manager of UNE  in Tangier, Morocco.  Majid has published widely on relations between Islam and the West. He is the author of  Islam and America:  Building a Future Without Prejudice (Rowman & Littlefield, 2012); We Are All Moors: Ending Centuries of Crusades Against Muslims and Other Minorities (University of Minnesota Press, 2009); A Call for Heresy: Why Dissent is Vital to Islam and America (University of Minnesota Press, 2007), Freedom and Orthodoxy: Islam and Difference in the Post-Andalusian Age (Stanford University Press, 2004), Unveiling Traditions: Postcolonial Islam in a Polycentric World (Duke University Press, 2000), and the novel Si Yussef (Quartet, 1992; Interlink, 2005). Majid's articles and op-eds have appeared in Cultural Critique, Signs, Chronicle Review, Washington Post, and other publications. He was the co-founder and editor-in-chief of the print magazine Tingis, a Moroccan-American magazine of ideas and culture, and now edits it online at Tingismagazine.com.

This DHC Lecture is organized in cooperation with: