Shylock in Germany: The Reception of Shakespeare's "The Merchant of Venice" after 1945

Shylock after the Holocaust -- Approaching a German Figure Memory

The essay collection emerged from the project's 2009 conference. It was published in 2011 as volume 78 of Hans Otto Horch's Conditio Judaica series. The German title reads: 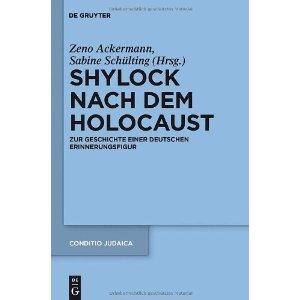 After the Holocaust, Shakespeare's Merchant of Venice surprisingly quickly regained its traditional position as an eminently important play within the (West) German theatre canon. Despite, or indeed due to, the fact that the play exhibits problematic constructions of Jewishness in the figure of the moneylender Shylock, it became an important medium for and reference point within difficult debates regarding the problem of German hate and German guilt. From the perspectives of English and German studies, theatre studies and memory studies, the essay collection discusses important phases and landmarks of this contradictory reception history.

Coverage of the book on the publisher's website (previews, PDF-files, etc.)

For a detailed description of the volume, please see the German version of this website.